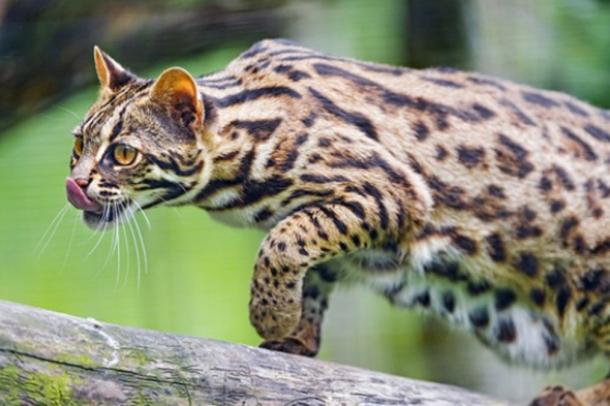 The Bengal cat descends from the Asian Leopard Cat, a small wild cat native to South-East Asia and the Indian Subcontinent.
They are widely distributed across different habitats including: tropical forests, coniferous forests, scrubs, agriculturally used areas and near water bodies.
It is about the size of a domestic cat, although there are significant regional differences.
The coat is yellow in the southern populations, but silver-grey in the northern ones. The chest and lower areas of the head are white. Its coat is marked by black spots which can either be round or rosetted, according to the sub species.
The leopard cat is a great climber and likes to play with water.
It is a solitary creature, except during mating season.  Usually leopard cats mate for life, and the couple looks after the newborn kittens together for about 7-10 months.

In 1963 the American breeder Jean S. Mill acquired her first ALC, a female called Malaysia.
She crossed Malaysia with a black domestic cat, thus giving birth to the first two Bengal cat hybrids (F1, first generation).
They were beautiful but extremely feral. The F2 generation was only half as feral.
The Bengal cat starts to be considered domestic from the fourth generation (F4) onwards.

It took several years for the Bengal breed to be officially recognised by T.I.C.A (The International Cat Association) and in 1985 Jean Mill was finally allowed to take part in an exhibition.  The Bengal was an immediate hit.

The Bengal cat is so coveted that in 1999 a woman from London spent 50,000 US dollars to secure one!

They are the “supercars” of the cat world: just like their ancestors, Bengal cats are born runners, with a lithe and aerodynamic build.
Just like its Asian ancestor, the Bengal’s most distinctive feature is its spotted coat. The spots give this cat a bold and wild appearance.  Another distinguishing element is this breed’s face, with its wide eyes (green, amber, blue, grey), round ears and very strong, prominent chin. The Bengal cat’s voice does not resemble that of most cats - it’s meow is harsh, and sounds more like a howl.  Its hind legs are longer than the front ones and this results in a long and powerful stride, supported by strong thighs and biceps.

The Bengal cat has a lot in common with the Asian Leopard Cat and it has inherited some of its behavioural traits as well. These are generally lively and energetic cats, not easy to keep at bay.

Bengals can create strong bonds with their friend/partner/owner.  There are various effective training methods that can be used to train and discipline a Bengal – these normally involve commands and reward-based tricks.  The longer you spend training and working with a Bengal, the stronger the bond between you and your pet will grow.

In summary, the Bengal cat needs a lively and energetic family, like itself, who can give it a lot of space and attention and bring this animal’s wonderful and magical charm to its full potential.

The official physical standard for the Bengal breed was first registered at TICA (The International Cat Association www.tica.org).
In general, the physical build of this cat should resemble that of it’s ancestor, the Asian Leopard Cat (WK#1).

Athletic, solid and muscular, with a long torso. Very strong and visible muscular structure. The Bengal cat’s ancestor, the Asian Leopard Cat, lives on trees and among vegetation, and in order to survive in the wild and hunt it needs powerful hips that enable it to jump from branch to branch, hunting preys that live on trees or small birds. The Bengal cat has inherited this feature that is among the requirements for competing in and winning exhibitions, contests or awards.

Bengals have a marked feline appearance because the rear part of the body is higher than the front and this allows the tail to hang low and swish in a soft, sloping way, just like the Asian Leopard Cat’s tail. In other domestic cat breeds, the hips are level with the rest of the body and this leads them to keep their tails raised.

In TICA’s standard the required body size is precisely defined as being medium-large, with significant variations between large males and small females.

The ideal size of a Bengal’s head should give the impression of being slightly small in proportion to the body. According to the standard, the head should be wedge-shaped, with an oval skull which protrudes between the ears. The bridge of the nose extends above the eyes creating a seamless profile all the way to the tip of the nose.

Heads with a short muzzle, excessively wide jaws or a break in the nose profile are undesirable.

The TICA standard requires full, prominent whisker pads. In profile, the chin should aligned with the the tip of the nose. Pronounced cheekbones. The chin shouldn’t be prominent but strong and full

The standard requires the ears to be placed in a slightly lateral position with respect to the skull, which protrudes between the ears. They should be cupped at the base. Short ears are desirable while small one with pointed tips are not.  The tips should be rounded. They should be medium-small with rounded tips in both cases.

Eyes set back into the face, closer to the nose and mouth than to the ears, thus allowing for a wider forehead, are desirable  They should be slightly almond shaped, not too round to avoid a frightened look.

The standard describes the tail as sloping down from the cat’s raised hips, hanging low.
Medium length and thickness, tapered at the end and with a rounded tip. It should be neither fluffy nor thin or sparse.

The feet’s knuckles should be prominent and the legs should give a general impression of strength and agility.
The rear legs are longer than the front ones giving the Bengal a light, springy step.
Generally boning should not be delicate or too fragile or too sturdy.